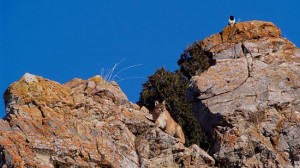 Ever the hunter, a mother cougar, joined by a magpie perched above her, surveys the landscape of the Jackson Hole National Elk Refuge for prey.
© 1999 Tom Mangelsen

Mountain lions tend to spend the day in dense cover, and to hunt when deer are active, most often at dawn and dusk. While these are also the times that people like to take a walk — avoiding the midday sun — we have a responsibility to be sensible when we do so in mountain lion country. The key to safety is to be aware, not afraid.

Lions do not see the same way we do. They look for the shape and movement of their natural prey. Deer are the lion’s favorite meal, and so it’s important for people to look as human as possible. Wearing brightly contrasting clothing can help a lion distinguish you from its natural prey. Although lions do not see colors as we do, dark, mid-tone or drab woodsy colors will make you look more like a deer.

Always be very alert when crouching or bending down in mountain lion country. Check the area carefully first, and make some noise. Lions aren’t able to see in sharp focus or in detail. Leaning down or bending over also makes the neck and back of the head vulnerable, and this is where a lion will target an attack.

Be especially concerned if you run across a dead animal in the brush. Steer clear. Don’t investigate or disturb the area. Lions cache their prey for weeks at a time, and will defend the cache.

Rapid movement of any kind — like biking or jogging — may trigger a lion’s instinct to chase.

Once the chase has begun, the lion is no longer able to think rationally or assess whether their target is a deer. Lions can sprint at speeds approaching 45 miles per hour, so outrunning them is unlikely.

It’s easy to see how a dog could be mistaken for prey, and chasing a pet may bring the mountain lion back to you. For that reason, it’s important to keep pets on a leash, and to keep them close to you.

It’s not safe to approach or attract any wild animal. Even deer can be dangerous. Although they appear passive, they deserve space and respect. 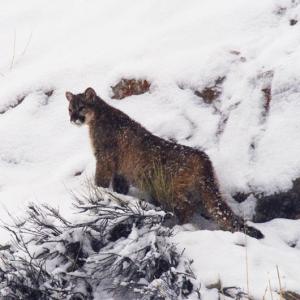 This cougar kitten has almost entirely lost its spots, and is nearing sexual maturity.
© Tom Mangelsen

Stillness of the Lion

Stillness ought not to be equated with a lack of aggression. Lions are stealthy predators, and they cannot roar as a warning.

When you encounter a mountain lion and it doesn’t run from you immediately, don’t jump to conclusions about the meaning of its behavior. It may view you as prey, or as a predator.

Lions will not turn their back on you if they view you as dangerous, because they know from their own hunting behavior that predators attack from behind.

So a lion not backing down is often a sign that you already have the advantage.

Avoiding Injury: The Lion and You

Predators, like the mountain lion, cannot afford an injury. If they are hurt they cannot hunt effectively, defend a territory, or seek water and shelter. When injured, wild animals starve.  But a sick or injured animal also may seek out easy prey, and become much less interested in anything that looks like it will fight back.

Research has shown that mountain lions go out of their way to avoid other mountain lions, and humans — relying on wariness as their first defense, resorting to fights only when necessary to defend a territory or a litter of kittens.

The best way to ensure that both you and the lion may leave safely is for you to back away slowly while continuing to look as big and intimidating as possible, leaving the lion avenues of escape.

It’s important that a lion not feel cornered, or separated from its kittens, or a cached kill. It will fight to reach — and protect — either. If a lion doesn’t take an easy exit, kittens or a cache may be the reason.

Most wild animals want to avoid humans. And their fear is healthy and should be encouraged, for their own safety.

People survive encounters with mountain lions when they behave aggressively. Not only does being hit by a thrown rock hurt, but it makes it very clear that you are not a deer or coyote.

In one case a 9-year-old boy in El Dorado County frightened a mountain lion away by playing his trumpet. When asked why he did that he said, “…my parents taught me to make noise, look big, do not run…”

Orphaned cubs captured by Wyoming Game and Fish Department. Their mother was the victim of hunters.  Picture courtesy of Cougar Fund

With much of the western United States being mountain lion habitat, many parks have come to expect occasional lion sightings as natural occurrence in wild areas, and will simply take note of your report of seeing a lion.

If the lion exhibited aggressive behavior in the encounter, officials may close off the trail temporarily as it may be a mother lion with cubs nearby; or they may choose to investigate why the lion behaved out of character, as it may be diseased or injured.

Making a media event out of a lion encounter often leads to the death of the lion, even when it behaved perfectly naturally, and caused no harm.

Some people will rush to the area in hopes of seeing the lion. Others will demand — out of fear — that the danger be eliminated.

So, if you see a lion in the wild, treasure your safety and that of the lion, and be grateful for the rare opportunity. Many people work their whole lives in the wild and never catch a glimpse of this elusive creature.