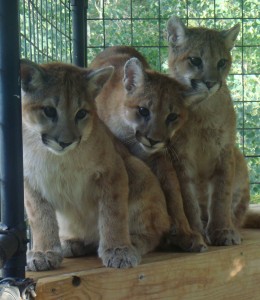 Lily, Lucy and Jake (a.k.a. The Little Rascals) came to us in October 2011 from a photography farm in central Illinois.  Their parents were bred purely to provide cubs for photo shoots.  Once they had passed their cute little “cub-ness” stage, the three of them were kept in a small dog kennel in the owner’s garage, along with their parents and many other animals.

We rescued them when they were eight months old.  They appeared to be healthy initially but we soon discovered that all three of them had a serious bone disorder called metabolic bone disease due to an insufficient diet at a young age.

This disorder causes all of the bones in the body to be very weak and fracture very easily.  We had noticed slight lameness in them but initially thought it was due to their playing too rough together.  Once we started to see a pattern, we had the veterinarian take a closer look.

At one point we thought we might lose all three of them to this disorder.  But with many hours of working together with veterinarians and with the Rascals, we found a healing diet and increased levels of supplementation that turned a dire situation into a happy one.

We are incredibly happy to now have three beautiful, healthy rascals displaying their young, playful energy.